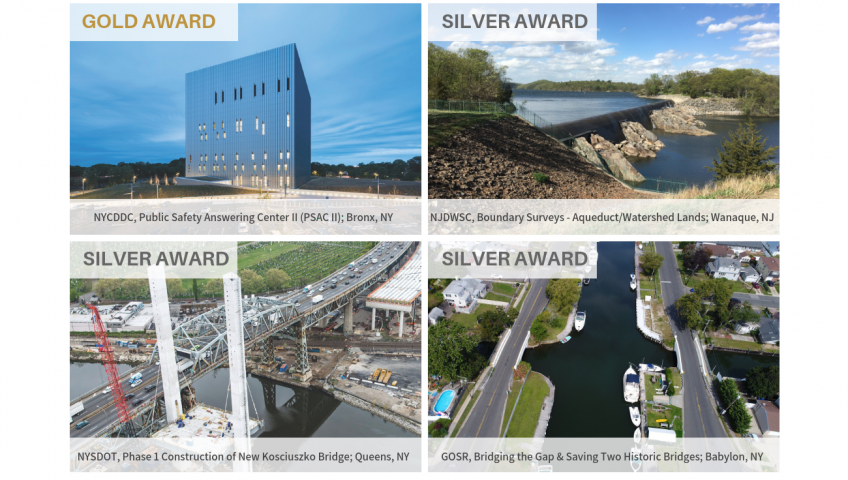 The firm also received three Silver Awards. Once again in the category of Structural Systems (Buildings), Tectonic won a Silver Award for its Quality Assurance/Quality Control Inspection services on the Phase 1 construction of the new Kosciuszko Bridge for the New York State Department of Transportation (NYSDOT). The new bridge will better serve its high NYC traffic volume by improving traffic safety, reducing congestion, and improving travel speeds. Its unique cable-stayed design will increase sustainability and provide spectacular views of Manhattan from the walkway and bikeway. The project was funded by the Federal Highway Administration along with Governor Cuomo’s New York Works program, and is the largest contract ever awarded by the NYSDOT.

In the category of Studies, Research and Consulting Engineering services, Tectonic won a Silver Award for Bridging the Gap and Saving Two Historic Bridges through an Environmental and Historic Review in Babylon, NY for the Governor’s Office of Storm Recovery (GOSR). These bridges provide the sole vehicular access to the 600 households located south of the Santa Barbara Canal. HUD CDBG-DR funding was allocated to replace the bridges while retaining the architecture of these beloved historic bridges and minimizing environmental impacts. The new bridges are stronger, more sustainable, and improve the resiliency of the neighborhoods they serve from future storms. These new “historic” bridges continue to carry residents, emergency responders and construction equipment on to these neighborhoods.

In the Surveying and Mapping Technology category, Tectonic won a Silver Award for Boundary Surveys – Aqueduct and Watershed Lands in Wanaque, NJ. The boundary surveys covered approximately 38 miles of aqueducts and over 6,800 acres of property owned by the North Jersey District Water Supply Commission. The use of GPS on the project will tie the entire property to the New Jersey State Plane Coordinates system using the North American Datum, NAD83. This process will simplify the re-establishment of the survey work and property line information for the District. As the populations of the surrounding areas continue to grow and a greater demand is placed on the water supply, it is likely the District will have to expand its operation. This survey will be the basis for future expansion.

President and CEO of Tectonic, Donald Benvie, credits the firm’s growing recognition by the industry to the outstanding professionalism of his company’s employees who dedicate and apply themselves true to the firm’s motto “practical solutions, exceptional service”.